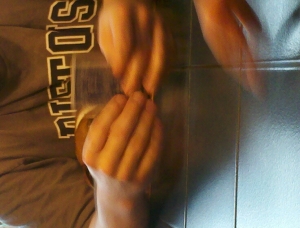 He buffs and polishes my nails

In a cloud of  dust around our heads

The drone of betrayal and anger

splays itself on to  the wide screen Tv

Held high against the back wall

The soap opera marches into his fingers

as he sands and buffs my nails

Muffled comments emanate from behind

The swath of white cover over his mouth

“I hate those shows.  I hate how they treat each other.”

I imagine his lips taunts in the hiss of the words

behind that mask that denies toxic inhalation

He exhales the toxic conversation coming

In his ears from the wide screen Tv

He gives the burn of it to my nails

I give and ‘Ouch’ and a twitch

His eyes never meet mine in this intimate

of my nails in the heat of his anger

And the septic conversation rolling

over us from the wide screen TV

I give agreement to his sentiment

It is an Opera that no amount of soap

will ever clean the toxic dump of it

from a man that honors and holds

his family in the tender truth of his love

A collective of poems and photos. All photos taken by me unless stated otherwise.

Put Out to Pasture

THE CREATIVE PALACE FOR ARTISTS AND AUTHOR RESOURCES

Collaborative conversations with Life's wise whispers in service to personal and communal evolution. To book personal appointments and group experiences, contact me at circleways.james@gmail.com or at (416) 966 - 2685.

“Everyone who is seriously involved in the pursuit of science becomes convinced that some spirit is manifest in the laws of the universe, one that is vastly superior to that of man.” - Albert Einstein